Give or take a year…

On 29 March 2017 Stiff Little Fingers arrived in Perth, Western Australia to play their first, stand-alone gig in the town. On the same evening, I had to fly out to the UK in preparation for the London Book Fair. I was ‘gutted’…

I’d been a fan since they’d first formed in Northern Ireland almost forty years earlier and they, more than any other band, had provided the backing track to my life. Like so many of us who had grown up in ‘The Province’ during what was known as ‘The Troubles’ their songs had provided a glimmer of hope that we could grab an alternative future. They weren’t, by their own demands. our heroes, but they sure as hell allowed us to find an escape through music. Music that suffered none of the ‘sugar-pop’ undertones of others. Yet, since I’d moved to Australia in 2003, I doubted I’d ever get the chance to see them in concert again. On that March day last year it seemed a particularly cruel irony that as they were flying in, I was flying out… It’s probably no surprise then, that when they announced they were coming back to Oz in February of 2018, I bought tickets to their Perth gig as soon as they went on sale. From gutted to wrapped. 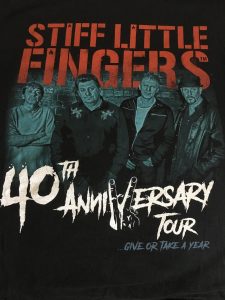 They played the Rosemount Hotel last night (perfectly supported by the Perth group Rag ‘N’ Bone) and if you want a music journo’s take of the gig, look no further than here: https://www.therockpit.net/2018/live-review-stiff-little-fingers-the-rosemount-hotel-perth/ but I’m not a music journo, so my thoughts aren’t a song by song examination of the set list. Rather, I’m just a fan and it seemed to me, a fairly average one as I looked around the crush of the crowd in the Rosemount. The majority, but by no means all of us, were blokes. Most of us, including some on stage, were a bit tubbier than we might once have been, but nothing a bit of imagination and a carnival-style mirror couldn’t redress. Definitely, most of us were thinner and greyer on top than we would probably like to be. A lot, even in the melee of the crush in front of the stage, had respectable spectacles perched on our noses. None of it mattered.

From the opening barrage of Go For It, through an explosive set from the early days, or as Jake Burns called them, the Dark Ages, every one of the middle-aged, wider, greyer, less youthful members of that audience were transported, TARDIS-like, back to their teen and early twenties self. Lifted by punk anthems and covers of Bob Marley classics, buoyed by drums and guitars that could blow away the years and the rafters of the Rosemount, Burns, McMordie, McCallum and Grantley made the preceding decades scatter to the four winds and the ensuing vacuum was filled with the vibrancy of youthful energy, rebellious descent and a shedding of any prospect of middle-aged respectability. 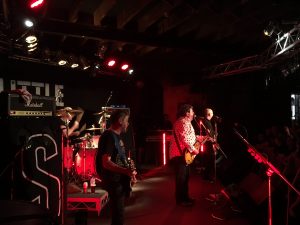 It’s why every fan of the band loves them, it’s why they continue to tour, it’s why their fan-funded indy record albums get fully bank-rolled in hours of the announcements being made. It’s why I made the lead character of my books a devotee of theirs. It’s also why I listened to a guy behind me at the bar before the event. He was a young Australian, probably about twenty. He was talking to another bloke who had obviously stumbled into the Rosemount for a drink and didn’t know what was occurring.
“Who’s playing?”
“Stiff Little Fingers.”
“Who?”
“Their old-school original punk, out of Belfast, Northern Ireland in the 70’s.”
“And you’re going to see them?”
“Yes mate. My dad loves them. I was raised on them. I had no choice. Not that I wanted one. They’re awesome.”
“Was your dad from Belfast?”
“Nah. He’s originally from Manchester, but he was a punk back in his day. Still is. That’s him over there.”
I surreptitiously looked around to see where the young bloke was indicating. At a table was a guy with grey hair, glasses, faded jeans and a battered tee-shirt. I pondered that if you could peel back the years, you’d find that young punk from Manchester still nestled safely inside. I figured it’d be the same for most of us. Less than an hour later, with the hammering beat of Tin Soldiers reverberating through our heads and into our souls, that’s exactly what had happened. All of us were back to being our deaf, sweaty and exhausted 18-year-old selves. Well, give or take a year…
By the time the spine-stiffening opening riff of my teenage Alternative anthem punched its way through the room, we’d all completely forgotten that we’d have to get up for ‘proper’ jobs and sensible lifestyles in the morning and that is the point of this. Yeah, the gig was good. The music was good. The atmosphere was good. But it was way more than that. If you can go see a band who, after all these years, are still on the top of their game and with it can transport you back to when you were on top of yours, then that is something entirely different. That is beyond special. That is worth every effort to grab tickets and get out to see them. That is Stiff Little Fingers. 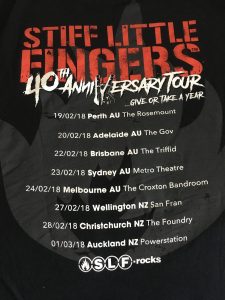 Ian Andrew is the award-winning author of the Wright & Tran Series of detective thrillers: Face Value, Flight Path and Fall Guys. All are available in e-book and paperback. Follow him on social media: