The Seagull – A Review 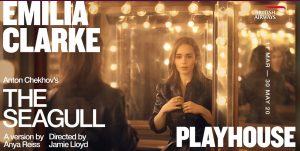 March 2020 – Thoughts on a night out – when you could still have one… I was going to write a review for the theatre ticketing website as an exercise in writing – just to keep me from going rusty – but the theatre has closed for the foreseeable – so I figured I’d put it here instead. This is me musing on the theatre – in London – now that I’m back in Western Australia, – ah why not!! – It is a bit of a long read… and no apologies, I like Chekov. I even named one of my characters in my book, Face Value for him…

Given the dire circumstances of Covid-19 it is wrong to say the shutting of theatres is a tragedy. It isn’t. It doesn’t compare to the hurt that will haunt the world for perhaps months. Of course it doesn’t. However, in its own small way, the loss of a shared cultural experience does diminish society. Especially when that experience is a nuanced, imaginative and superbly acted performance such as The Jamie Lloyd Company‘s inspirational direction of Chekhov’s ‘The Seagull’.

Let’s not be naïve though – the cast was presumably the main draw for all bar the most devoted Chekov fans and I have no doubt a few that came to see Emilia Clarke in the role of Nina might have thought the play was written by a Start Trek helmsman… Yet, by the time even those souls left the theatre I’m fairly sure they’d been inspired. The play is a maelstrom of misplaced passion, unrequited love, sadness, joy, humour, kindness and despair. At its core is the underlying nature of us as a species, our relationships with our fellow humans and how we react to those we should hold close. How seemingly timely.

I’ve seen a few productions of Chekov and the task of getting the Russian’s themes across to an audience (and bearing in mind the writer’s idiosyncratic use of off-stage action) is a difficult one for actors. Usually. In Lloyd’s stripped back set (minimal is a huge understatement) and devoid of period costume, or any costume at all save the street clothes they arrived on to stage in, the actors are forced to deliver by sheer raw talent – and deliver they do.

From Daniel Monks, a relatively unknown debutant on the West End Stage who has come from Western Australia – through to his most definitely known, yet fellow debutant, Emilia Clarke fresh from Westeros, and with a supporting ensemble including some of the most familiar faces from UK TV and Film, they lift Chekov’s masterpiece from an undressed set to the inner eye of the audience with superb timing, empathy and conviction.

Emilia Clarke and all that surround her are excellent. Clarke reinforces that the ‘Mother of Dragons’, surrounded by green screens and high-tech wizardry in her most famous role needs none of it to give a performance. She is the real deal and proved eminently capable of holding her own on the barest of boards at the cutting edge of her chosen profession.

Monks gives a performance that was so engaging it was a long time into the play before I realised the man is overcoming real-life disabilities that could legitimately have stopped him from ever fulfilling his dreams. As it is they are an invisible, yet tangible, proof that all obstacles are there to be overcome. A feat he achieves in the midst of finding every opportunity to make the audience feel ‘poor Konstantin’s’ angst.

Robert Glenister is understated yet soulful as Sorin, whilst Indira Varma (also of Game of Thrones fame) is beautifully horrible, self-centred and despicable as the fading actress Arkadina. The rest of the cast are equally good, however I was most enthralled by Tamsin Outhwaite’s portrayal of Polina. I know she had a theatrical background but the likes of EastEnders and New Tricks can blind a watcher to how good screen actors are.

This Chekov renewal allowed Outhwaite to display a depth and a craft that was second to none on such a talented stage. She was understated, broken-hearted, bitter, resentful and loving in a single breath.

I hope Covid-19 will be a dim and distant memory soon. I hope it will pass and the suffering it has caused on a human level can be borne. I also hope that once life returns to normal we can return to embracing sports and culture and recreational activities because they underpin our society. I also hope, that despite being shut so soon after they started, this cast manage to reassemble and put on a run in the West End for their production of this wonderful play will raise the lowest of spirits. When all is well, go see it.

Update – June 2022 – The cast are back to put on a run at the Harold Pinter Theater in London – sadly I will miss it – but if you are in the UK – as I wrote above, some two years or more ago – you should do yourself a favour and go see it. . 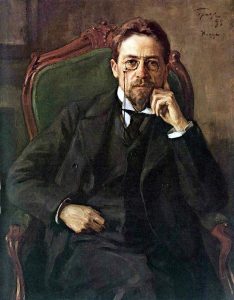