Unlike quite a lot of folk, I like air travel.

Always have. Even in the confines of cattle class. Yeah, no freebie upgrade on the Emirates flight out of Perth. I did score a spare seat beside me, although the couple in the next two seats over decided they would get more use out of it and proceeded to spoon across all three seats. Fair enough. They managed to sleep and not kick me with their feet so it was a result of sorts.
The baby (it is obligatory to have at least one crying baby on all flights over ten hours. Even in the military, although back them we called them Sailors 😉 Anyway, the baby on this trip was a lot less hassle thanks to the wonder that is Bose noise cancelling headphones. What could otherwise be a major annoyance becomes a tiny little surround sound, fill-in effect that is completely drowned out by TV, movie or music on the Emirates ICE, widescreen, in-seat entertainment system. The airline makes a big deal of the widescreen feature, but it’s the same width as the seat. I mean it’s good, but not exactly 50 inch high def. To be fair though, the ICE system is quite speccy, comes with three external cameras to watch take offs and landings and… Modern wonders… You can have your electronics switched on and there is allegedly wifi on board. 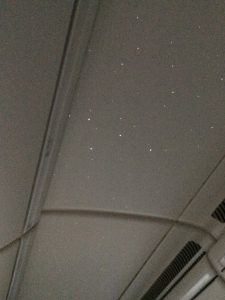 There is too. It just didn’t work. I was a little gutted as I tried to make a Tweet or a Facebook post from 30,000 feet. But… in compensation, the aircraft had sparkly ceiling lights that looked like stars (only mildly disconcerting when you first look up from a drowsy half sleep and think the fuselage has ripped open)…
Another interesting event was the cabin crew fella who came round offering those weird hot towels. He was from Northern Ireland. Carrick to be precise. Carrick, for those not in the know, is the next door town to my home. That means me and the cabin fella had an instant bonhomme rapport as two exiles together, accompanied by that strange strangeness that comes from neighbouring home town rivalries. You all have one. The next town along is… Well… Just full of different folk. Hence the following initial exchange…
“Hot towel, Sir?”
“No, I’m dead on thanks.”
Grinning attendant says, “You sure?”
“Aye.”
“They’re free.”
“Uch I know, but the last one I had took me all day to chew. Where you from?”
“Carrick. Yourself?”
“Larne.”
“Boys, we don’t get many Larne men on here.”
“I know, we canny normally afford the ticket.”
“Ah well, I’ll be sure to look after you.”
Now, at that point he moved on, dispensing towels and I settled back to await his return and the offer of an immediate change of seat to First Class. Or maybe Business. Or at least a constant flow of drinks and ice cream. Instead, the next time I saw Carrick was as I was getting off the flight.
“All the best,” he says. “Is this you?”
“Nah, I’m off to London then home for a wee while.”
“Really? Sure there’s no many that go back to Larne once they’ve left.”
“Aye, but only because we might overshoot and end up in Carrick.”
A laugh and a shared “All the best,” and that was that. He had obviously looked after me in a peculiar, Carrick v Larne sort of way.
But it was all forgot as I entered into the luxury of Dubai’s terminal 3. Which is multicultural to a fault and just that little bit more classy than most. 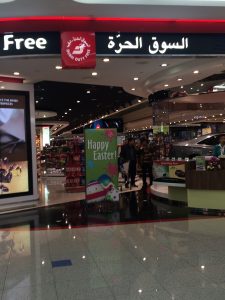 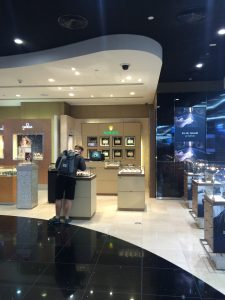 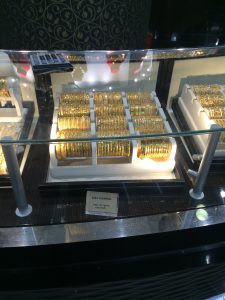 As is the Emirates lounge. Oh yeah, good news… scored a Qantas Frequent Flyer upgrade for the London leg… sweet… 🙂 Hence the lounge.. which has a water feature, an incredibly well stocked bar and wall to wall football matches. 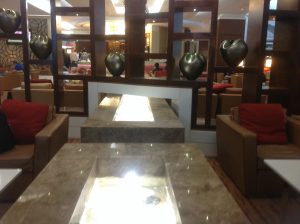 I always think slumming it or roughing it is sooo overrated. I decided not to try. Instead, I determined that at 06:00 local, a glass of Moet and a rerun of Liverpool beating Man Utd in the Europa League was a good use of my time  As I said, I like air travel. 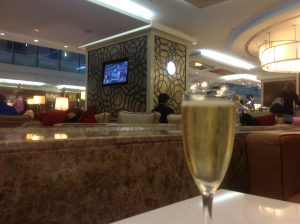