Who do you think you are, Jon Snow?

So I wrote this for my Mrs, and others like her, who love Game of Thrones, but lose the plot on who is who at times..

Still confused about who the heck Jon Snow’s parents are? Let me explain as simply as possible… If you are a Game of Thrones “nerd” and know all there is to know about the Song of Ice and Fire, then look away now. This post will be seriously old news for you. If you are a casual viewer who hasn’t watched all the episodes of all the series, then definitely look away now. There are spoilers aplenty.
But, IF, you are a normal, sane, rational viewer of a television show that is gripping, but occasionally confusing as hell… read on and have veils lifted from your eyes.
Oh and yeah, HBO just put out a graphic that explains all this, but sheesh, could they have made it any more confusing… I shall try to be simpler… 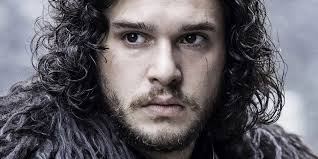 It’s all about the boy. Jon Snow. Or as my daughter calls him, Kit (seriously, they’re on first name terms!)… I, on the other hand, shall just call him Jon, which is a deceptively simple name for a character on this show.
Jon is, was, allegedly the bastard son of Ned. Until the last episode of the recent series when we find out that he isn’t that at all but likely to have been the son of Ned’s sister and her kidnapper (more on that later) a fellow called Rhaegar Targaryen, heir to the Iron Throne and… dun dun dun…brother to Daenerys (the blonde girl with the dragons…). Which, without any further proof makes a whole heap of sense.
The Starks are the north. Cold, wintery and icy. The Targaryens are from the south, keeper of dragons, warm, toasty and impervious to fire. If Jon is the forging of Stark and Targaryen then it makes the title of George R.R. Martin’s book series “A Song of Ice and Fire” seem a lot more interesting. Don’t it?
So how did this all come about… Ah well, back in the day, there was a mad king called Aerys the Second.

He was Rhaegar (what sort of a name is that… I shall call him Ray from now on…). Anyway, Aerys was Ray’s dad. Ray was handsome and brave and charming and… well… genuinely nice according to all that speak nicely of him. Handsome is a bit of a guess, but you only have to look at his sister Daenerys (who I shall now call Danny) to get the measure of the Targaryen bloodline. Them Tagys are all cool and windswept… There was another brother who was called Viserys (who I shall call Vince) and who doesn’t matter much ‘cos he died by having a crown of molten gold poured over him… Nice scene by the way… Look it up.
So Ray was the eldest son and heir to the throne. He was married to Elia Martell for probable political and strategic reasons, as that is what the Tagys did. Still do in fact. At least according to Danny. Elia was a princess from Dorne (a kinda of North African, Southern Spain type of place, all windswept deserts and Moorish maidens. Moorish, not moreish.)

Meanwhile, Robert Baratheon and Ned Stark were mates. (Yep, there was, and they were, a lot more besides, but basically that’s all you need to know for now). Robert was promised the hand of Ned’s pretty sister Lyanna. And the rest of her as well, no doubt. He apparently quite fancied her. They were even engaged to be married. BUT… Ray (handsome Ray) took part in a big tournament and won it. He was given a crown of flowers to present to the prettiest lady in the place. Instead of giving it to his wife, he presented it to Lyanna.
He then kidnapped her, raped her and killed her. Or so the history tells it and there’s the big catch. You see, the thing about history is that it is written by the winners. In this case Robert.
‘Cos Robert was pissed that handsome Ray stole his girl. So pissed that he raised a rebellion that overthrew all the Targaryens.
Robert killed Ray on the battlefield and declared himself King and Tywin Lannister (Jamie’s dad. You remember Tywin. He’s the one who was shot while on the pot), well he betrayed his Targaryen masters and helped Robert wipe them out.
What did he do that for? It seems Tywin was pissed because he had wanted his daughter Cersei to marry Ray, instead of the Dornish Elia. Tywin had his man “The Mountain” (he’s big and is in the service of the Lannisters) kill the children of Ray and Elia and then rape and murder her (which we know ‘cos Elia’s brother came to avenge her, but unfortunately had his head squished by the same Mountain – another good scene, look that up too)…

Jamie killed Aerys the Second just before he managed to blow up all of King’s Landing and little Danny and her brother Vince scarpered pretty quick to over the sea. (Where Vince died in the gold and Danny, well she became awesome and now has pet Dragons…).
Robert married Tywin’s daughter Cersei and all seemed happy ever after. Although Cersei would probably have preferred to marry Jamie, but being he was her brother that wasn’t allowed.
Ned became King Robert’s main right-hand-man. Until they fell out a bit later when Robert, all fired up and still wanting to kill every last remnant of the Targaryen house, insisted he wanted Danny killed and Ned was all, “Nope, that’s not the right thing to do,” in a suitably broad Northern accent.
And that is what we all thought up until now… But now we know that Jon is the offspring of Lyanna and Ray, there are a few extra possibilities…
IF Ray was young and handsome and Lyanna was young and pretty and he was in a marriage of political convenience and she was more attracted to the blond southern, handsome, young, cool heir to the throne, rather than big fat Robert from ‘oop north,

then maybe she wasn’t kidnapped. Maybe she chose to elope. Maybe the baby was conceived in love rather than rape and maybe, in the old traditions of the Targaryen house, Ray decided to take more than one wife. For according to the “Westeros lore” If you have a dragon, you can have as many wives as you want. Which seems fair enough when you think about it.
So… perhaps Ray and Lyanna were married in secret. That would make Jon the legitimate heir to the Iron throne, because he’s the direct male heir and would take precedence over his Auntie Danny. But we have already seen, Jon is quite happy having an alliance with his sister Sansa (not in a Jamie/Cersei way), so maybe an alliance with Auntie Danny and her dragons will be okay too…
Just to add a bit of substance to this, Lyanna was being guarded in a tower by the two best men Ray had in the King’s Guard, while he was off fighting the battle in which he died. He had asked them to protect the tower that Lyanna was in rather than be by his side. So Ray was nowhere near Lyanna when she died. She died in childbirth. Ray knew she was going to have a baby. Would he have asked his two best to protect an illegitimate child? Probably not. Would he have specifically asked the King’s Guard to protect an illegitimate baby? Probably not. More likely they were protecting his wife and a soon to be born royal baby. When Ned arrives to ‘rescue’ her, Lyanna knows that Robert is very angry (mild understatement) and that she has to protect the child. Surely, if she had really been kidnapped and raped, Robert wouldn’t have been very angry… or indeed interested in the fate of an illegitimate child. But if she had stood him up, eloped with the love of her life, had an heir… then that would need to be protected from Robert…
And there you have it. As simply as I can manage it. Oh and a little picture that might explain it all… And nope, I haven’t included Cersei and Jamie’s kids or Tyrion Lannister or any others… That’s all way too complicated… But one thing that is readily apparent… There are an awful lot of dead folk in this Game…

Ian Andrew is the author of the alternative history novel A Time To Every Purpose, the detective thrillers Face Value and Flight Path and the Little Book of Silly Rhymes & Odd Verses. All are available in e-book and paperback. Follow him on social media:

All imagery used with commons license. No infringement of any copyright intended.