In October last year, I had the good fortune to be invited to CrimeSceneWA. Apart from the whole weekend being a lot of fun, there was also the best cake and I met some fascinating people. Two of them were Ned Kelly Award-winning authors. Candice Fox, whose book, Hades, I’ve reviewed on here already, and Emma Viskic, (pronounced, as I was reliably informed, Vis-kitsch – and not what I misspelt in an earlier version of this – Sorry Emma…)
Emma won the 2016 Ned Kelly; Best First Fiction, for her novel, Resurrection Bay. Just in case you don’t know, the Ned Kelly’s are Australia’s oldest and most prestigious prizes, honouring published crime fiction and true crime writing. The novel also won an unprecedented three Davitt Awards at the Sisters in Crime Awards; Best Adult Novel, Best Debut, and Readers’ Choice.
Prior to going to CrimeSceneWA, I scan read Resurrection Bay, but over Christmas I decided to reread it, as the central character and his struggles throughout the book had fascinated me.
Caleb Zelic, is our ‘hero’ and boy does he have some wonderfully disruptive baggage to cart around with him. In the opening page, he’s found cradling his best friend, who has bled out on a kitchen floor after having his throat slashed. 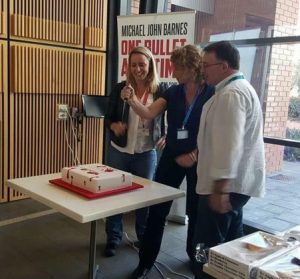 That’s a good start to any crime book, (and also a reason why we wondered about giving Emma the cake-cutting knife) but it is quickly and cleverly revealed that Caleb, a private investigator, is profoundly deaf and has been since early childhood.
Due to his hearing he’s been isolated from his surroundings for years, but his stubborn refusal to admit his difficulties to others, ploughing his way through life trying to lipread those who can’t sign, subject him and those who love him, to a myriad of frustrations. This failing to explain why he mishears or misinterprets and the consequences of that to all his relationships, is conveyed in a profoundly touching way that lingers in your consciousness. However, like all things, it seems even deafness has its bonuses. For Caleb has the fascinating ability to read the situations and people he is presented with. A smile, a blink, a cough, he can read the tells and interpret the avoidance of others. Nice skills for a PI.
His side-kick Frankie, older, ex-cop, spiky hair, recovering alcoholic, is a tour-de-force and a woman most would probably want to avoid. Between the two of them, they investigate the murder of Caleb’s friend and through it uncover a whole host of truths that will shatter Caleb’s faith in the world. Add to the main story a touching rendition of Caleb’s ex-wife and still-true-love, a number of other cameo characters that are superbly defined and a setting that mixes big city rush with small town Australiana and it is easy to see why Resurrection Bay won so many awards.
It is also telling that Emma learnt Auslan in the run up to writing Resurrection Bay and that depth of research shines through. My only criticism is on Caleb’s thoughts about the shape of the mouth and lips when people speak their names. “Rose looked like Ross, Matt looked like Pat, Ian looked like nothing at all.” Ah well, so much for my self-esteem…
The sequel, or what I hope will simply be the next in the Caleb Zelic series, ‘And Fire Came Down’, is currently being written. Resurrection Bay is published by Echo Publishing and you can have a quick preview of it, or buy it direct, from the links underneath the cover image above.
Ian Andrew
Ian Andrew is the author of the alternative history novel A Time To Every Purpose, the detective thrillers Face Value and Flight Path and the Little Book of Silly Rhymes & Odd Verses. All are available in e-book and paperback. Follow him on social media: