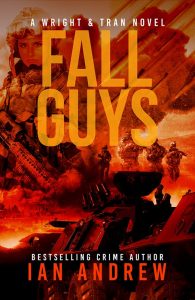 Thought I should post a quick update, as I’ve been getting asked quite regularly about it…
Fall Guys, the third in the Wright and Tran series of novels, is due for release in March 2017. The last few chapters are being written, then a couple of months of editing and cover design before it is ‘let free’… into the world. The ‘close to final draft’ of the cover is on the left.
Over the next few weeks, the pre-order links will go out and then I’ll be setting up a series of exclusive, early preview chapters, so keep an eye out for that.
This third novel is a return to more familiar ground for Kara and Tien. Less a straightforward private investigator crime mystery and more a need for them to get their heads around the subtleties of the Arms trade.
______________________________________________
“We want to know why the Brits are selling weapons to ISIS”

When a break-in threatens Britain’s National Security, Franklyn calls on Wright & Tran but Kara will have to take this case on her own. Tien wants nothing to do with the world of Private Investigations and less to do with the world of Franklyn. Kara goes solo, but finding out who is responsible for the break-in is the easy part. Finding who the real criminals are is much, much harder.

Isolated in a world of half-truths and lies, international arms deals and power politics, she is quick to discover that she’s been working for the wrong side. What she didn’t figure on was that making amends will place her, and those she loves, in the sights of those who have everything to lose.

Till later then… I’m off to do final reviews and edits in the sun, while relaxing in Bali. Not the bit that appeared in Flight Path, for any of you who have read that. I’m going to an altogether nicer and more relaxed area of the idyllic little island.
Merry Christmas !!